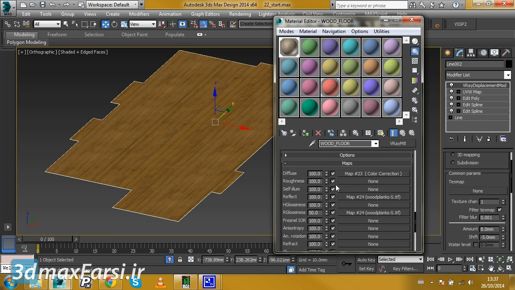 3ds max Keyframe Animation Setting up Time Configuration The number 4800 was chosen because it’s divisible by common frame rates such as 24 and 25. That allows us to switch the frame rate without changing the total time. Moving on we have the playback section here. There are only a couple things I want to point out. First is the Real Time option. It’s enabled by default and we usually want to leave it enabled so that 3ds Max will play back at the current frame rate. And we have the Active Viewport Only switch here. I like to turn that off so that all viewports will update when we play an animation. And this option exists to prevent frames from being dropped in a heavy scene that’s running slowly. Because updating all views makes playback run even more slowly. But my recommendation is that the Active Viewport Only option should be disabled. If you see that 3ds Max is dropping frames during playback then you can disable the Real Time option, and in that case every frame will be displayed even if that means playing back at a lower frame rate

. And this is actually pretty important when you’re dealing with things like fast-moving animation. If you find yourself in a situation where the timeline is either skipping frames or running slower than real time, then either you can do what you can to lighten the load on your scene by hiding objects or whatever, or you can simply create a preview animation from the Tools menu. And this actually makes a lot of sense from the perspective of a production environment, which uses time code. Each second of time code starts on frame 0. And so does the default 3ds Max start time. If we want to view the timeline in seconds and frames, then the start time of frame 0 starts to make a lot of sense. Go up here to the Time Display section and switch that over to SMPTE, or Society of Motion Picture and Television Engineers. And now we get time code numbers displayed in the Animation time fields. And kind of as is typical with some of these very old features of 3ds Max, it’s actually not technically correct. SMPTE time code always uses leading zeros. So the start time really here should say 0:00:00, but it doesn’t. It’s missing those leading zeroes. But let’s not get too pedantic here. The point is that the beginning of this animation clip starts on the first frame of the time code second. And that first frame is always labeled zero. For 30 frames per second time code, the last frame of a second is labeled 29. So a second starts on frame 0, ends on frame 29, and each frame is 1/30 of a second. Let’s say we wanted five seconds of animation. And without thinking about it too deeply we might enter in an End Time down here of five seconds and zero frames. I’ll do that, I’ll type in 0:5:0. And press enter. Now what we have here is actually five seconds of animation plus one frame because we’re stopping on the first frame of second number five. And we’re actually going to include that frame within our clip. In the frame count field over here, we see that the clip duration is five seconds and one frame. And this is the relevant field that tells us the length of our animation. This length field up here is completely bogus, and I would block that out of your mind, if possible, and just pretend it doesn’t exist because it makes no sense. It’s merely the end time minus the start time. It that doesn’t give us any useful information whatsoever. If I wanted exactly five seconds of animation, I could either start on frame 1 or I could end on frame 429. Let’s do it by starting on frame 1. I’ll just click on the up arrow on this little spinner here and set the Start Time to 0 minutes 0 seconds and 1 frame.