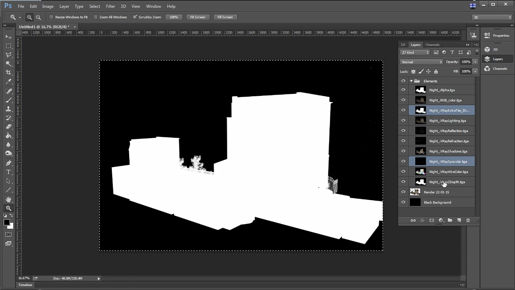 This map is applied to an object’s surface, not to the scene background. Also notice the checkbox down here labeled Use Real World Scale. We’re not using that just yet. When that’s off, the image will be tiled a certain number of times across the UV space of the object, and the default tiling values are one in U and one in V. All right, now we’re ready to apply a UVW map modifier to create mapping coordinates. I’ll minimize the material editor, and select the object which is Wall North, and then go over to the Modify panel and from the modifier list pulldown, scroll down near the bottom and choose UVW Map. Once you apply that modifier, you should see some sort of pattern appear on the object. In the UVW Map parameters here, we can apply mapping in different spaces. The default is a planar projection, and that projects texture pixels, also known as texels, in parallel lines. But if we had a spherical object, you might try a spherical projection. In the case of this wall, we’ll start with a planar map and see how that works. The most important aspect of the planar map is its orientation, and we control that from the alignment section down here. Currently, we see the UVW mapping gizmo, or manipulator, displayed in orange, and it is oriented so that the texels are projected in the world Z axis, which is the axis of elevation. And if we look carefully, we will see that the texels are stretching down the wall. If we get in close with Control + Alt + Middle Mouse, we don’t see any significant detail here. We just see lines running up and down, we don’t see any little speckles or anything that are actually present in the bitmap. And it’s easier to understand what’s happening with this projection if we go into wireframe mode. So I’ll back out again, and press F3 to go into wireframe. And maybe orbit around with Alt and Middle Mouse, and we can see that orange UVW mapping gizmo is precisely sized up to the object, and it’s oriented with the XY plane. So it’s projecting lines of projection orthogonally to the XY plane, or in the Z axis. And this little line sticking out from the gizmo indicates the top of the texture. All right, let’s try aligning two different axis. We’ll go back to the Alignment section and align in Y. Now we see the gizmo oriented differently. It’s now aligned with the ZX plane, and the lines of projection are in the Y axis.

And we’ll take a look at that in shaded mode. Turn off wireframe with F3, and now we can see if we get in very close that we’ve actually got some detail on that surface. We’re not just stretching pixels along that wall. Let’s also try aligning with X and see what that does. Switch alignment over to X, and now we can see that the gizmo is aligned differently. We can switch back to wireframe with F3, and now the gizmo is oriented along the YZ plane and projecting in X, and additionally, it’s rotated 90 degrees, so that the top of the texture is no longer aligned with the top of the object. It looks like in this case alignment in Y is our best option, so we’ll go back to Y, and now we can manually manipulate the gizmo in order to position the texture where we want it to be. Up in the Modifier stack, open up the UVW map modifier and select Gizmo, and now we’re in gizmo sub object mode. And as soon as we do that, the Select and Move tool is activated automatically, and we can select that gizmo in Y and just pull it out so it’s in front of the wall, so we can see it, and