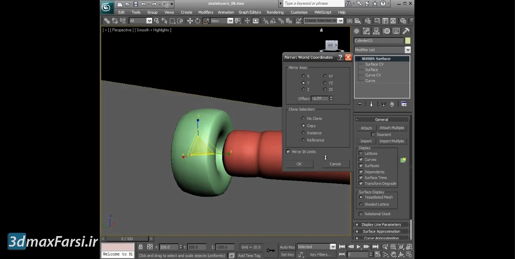 3ds max Modeling Adding edges with Quickslice Alright, that’s a pretty cool effect. Now we have a bend and a taper in a particular order and the way these are applied is from the bottom up so that’s why it’s called a stack. We start with a box, then we taper it, and then bend it. And if you change the order of operations, you’ll change the outcome and sometimes in unexpected ways. And if you’re particularly unlucky, if you move the modifiers, you may get into a situation where even if you move them back, you don’t get the same result.

3ds max Modeling Adding edges with Quickslice  That’s actually kind of a program error. So if you’re working in production you may want to save your scene before you start moving modifiers around just to be safe. So let’s see what happens if I select that bend modifier and then click and drag, holding the mouse down and I’ll see a blue line when I get between two modifiers. So I’ll move that bend down and release it so that it is below the taper and now we have a completely different result. It’s being bent first and then tapered. Alright, let’s try to move that back. So, click on that bend modifier and drag it back up above the taper.

3ds max Modeling Adding edges with Quickslice And you should get back to where you were. In fact, everything worked out fine this time. So that’s the basic concept of the modifier stack is you’ve got these effects that can be layered on top of one another and you can reverse any of the operations if you’re working with these parametric deformers. Finally, let’s just line up the object with the monitor and I’ve got the move tool selected. I’ve got the y position down here. I’ll just type it in. It’s be 18.5 centimeters and there we go. It’s lined up just precisely. And that’s how to work with the modifier stack.