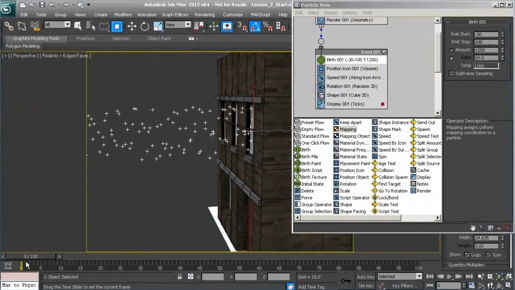 3ds max Navigating in viewports Because if you orbit in an orthographic view, it’s going to do strange things, and you don’t want that. But let’s look at orbiting in a perspective view first. Click and drag in the center of the circle, and you’re able to orbit around the center of the scene. If you click on the little boxes on the left and right, then you can orbit while maintaining a constant tilt. If you click on the upper or lower buttons, then you’re able to orbit vertically. So this is more like a trackball. When you click in the middle, you’re orbiting in two axes at once. Now, we’re not actually going in the third axis, which is a canted angle or a dutch tilt. If we click outside the circle, and we’ll get a dutch tilt or canted angle. And that’s not usually desirable. If you want to undo that, you may find that the standard undo doesn’t work because these undo buttons up here are for scene commands. A scene command is something like creating an object or changing its position or changing some parameter. Those are all scene commands. But these viewport controls are not scene commands. They only control the viewport. And so to undo a viewport command, there’s a separate undo buffer. And it’s found on the viewport menu. If you click on the viewport label, in this case, perspective, you’ll get a popup menu from which you can choose an undo, Undo View Rotate. And this has a keyboard shortcut which is Shift + Z as distinguished from the ordinary undo, which is Control + Z. So if we do an Undo View Rotate, we are restored back to a level horizon line. Now, if you do use the Orbit tool in an ortho view, this is what happens. You get what’s called an axonometric projection, sometimes known as a user view, and it does say orthographic up here, but that’s actually a misnomer, as well, because an orthographic view has to be parallel to the world coordinate grid, and we’re in an arbitrary rotation here.